Inside Lawn Care: The Dandelion 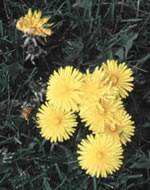 Dandelions are considered a weedy perennial to lawns, landscape beds, nursery crops, and other areas.  Because of it’s perennial nature, the dandelion plant will persist from year to year if left undisturbed.  Typically dandelions will set their first seeds in early spring, and then those seeds will germinate throughout the rest of the growing season.

The Culture Behind Dandelions

Dandelions might be an aesthetic blunder in certain situations, however the plant itself has been used throughout the history of civilization.  Dandelions, or dent-de-lion (lion’s tooth in French), has been used for salads, wines, rubber production, and the occasional quesadilla.  Honey bees utilize the early flowering of the dandelion for one of their initial food sources in the spring.   They will later go on to create that honey that you enjoy on your favorite snack!

A weed is any plant that is in the wrong place.  When dandelions set their seed they are often taken to areas where they are unwanted, such as your lawn.  Dandelions have that traditional seed head that is easily blown by children or the wind.  When needing to control dandelions, there are many effective control products on the market.  Ask your local lawn care professional for more information about control, or perhaps you will allow a few of those “lion’s teeth” to stick around for a snack or two!

Author: Andrew Muntz received his Master’s of Science in Turfgrass science and his Bachelors of Science in Landscape Horticulture at The Ohio State University, Columbus OH.