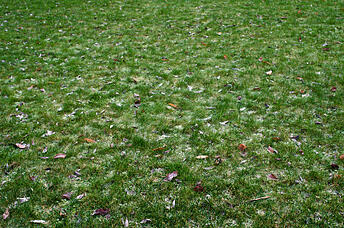 About a week ago, most of Ohio experienced a frost.  Although frosts during March are typical, this year’s unusual weather, left some plants prone to injury.  During the past week, many people are noticing problems with their lawns.

Frost Damage: What Causes It?

Mowing when grass is frozen, or still has residual frost on it, can injure the plant.  This causes excessive rupturing of the cells in the plant.  Another potential problem, is if you mowed your lawn right before that frost.  Mowing creates a wound to the plant, and that wound would then be more susceptible to frost damage.  It’s kind of a long the lines of if you were to get a cut on your finger.  If you got dirt in the fresh cut, it would hurt and be much more likely to get infected than if you got dirt on a cut that had been healed over.

How To Repair The Damage

You may or may not be witnessing some die back to your lawn.  Most of the exposed areas near the top of the plant will turn white and begin to curl.  In more extreme cases you may be seeing some browning and discoloration lower on the plant leaves.  Although it might seem like the end of the world now, most of the damage being reported in Ohio is only cosmetic.  It might take a few mowings to grow out of the damage, but the long term effects are minimal.

Adding Fertilizer IS NOT the Answer!

You do NOT need to fertilize more or provide any more inputs.  The fertilizers that have been put down are scheduled to last you a certain amount of time.  Your lawn care professional knows best, trust them!

Another Problem Caused by the Early Spring: Crabgrass

Has crabgrass invaded your lawn early?  Find out if the early spring has caused an early outbreak in Ohio's most notorious weed.  READ MORE HERE

Author: Andrew Muntz received his Master’s of Science in Turfgrass science and his Bachelors of Science in Landscape Horticulture at The Ohio State University, Columbus OH.