Goldenrod: A Beneficial and Beautiful Plant

As you drive down the highways, or other areas that has natural “prairie like” settings you may be noticing masses of bright yellow flowers.  This plant is a native perennial to the United States, and although it is often considered a weed, it can be very beneficial and beautiful!

Goldenrod, Solidago spp, is the official flower of Kentucky.  The plant itself grows around 4-5’ tall, and produces a heavy floral display in the fall. Many insects including beneficial honey bees and bumble bees use these flowers to get their final ration of food before the winter months. 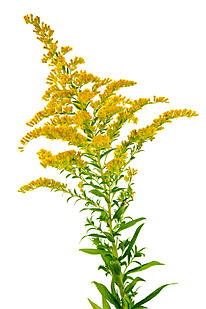 During the early 1900’s goldenrod was often thought to be the cause of hay fever or allergies in the late summer and early fall.  As science moved forward it was determined that rag weed, which blooms about the same time, was actually the cause of the allergies.

Breeding efforts have brought this “weed” to garden centers in our area.  Some of the plant developers have been able to cultivate goldenrod into a plant that might fit well into your landscape.  Remember though that these plants often are very good at reseeding themselves and might become very happy in their new homes!

Guest Author: Andrew Muntz received his Master’s of Science in Turfgrass science and his Bachelors of Science in Landscape Horticulture at The Ohio State University, Columbus OH.
ABOUT THE AUTHOR