Perhaps I chose this topic because the concept has recently become a front and center issue on my own home lawn care.  I’m talking about moles, the small mammal that burrows just under the surface of the ground, creating tunnels throughout your lawn. Here are a few thoughts about mole activity and control.

Moles
Moles are classified as mammals and there are 6 different types of moles in North America. The most common is the Eastern mole or grey mole.  They are very wide spread in North America.  Moles are often found near wooded areas because this is their natural habitat.  During certain times of the year they are more likely found in lawns especially during the spring months of April-June (mating season), and during the fall as the temperatures begin to cool.

Moles are amazing creatures because of their strength. 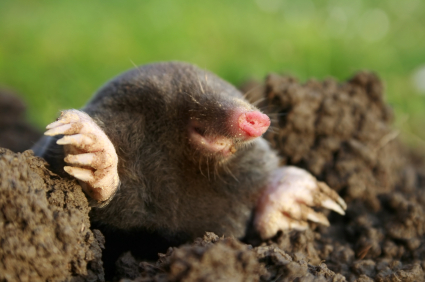 Fun Fact: Moles can exert a digging force up to 32 times their body weight.  In human terms that is like a 150 lb person being able to exert 4800 lbs of force.

Damage
Because of their under ground tunneling habits, moles can cause damage to the root system of your lawns.  This can be very frustrating because usually during the spring and fall we are working to encourage root development.  They also leave mounds in the yard that are unsightly and annoying.

Control
There are close to a million remedies for mole control, I googled it.  However, if you ask the experts, the only way to control moles is by trapping them.  Throughout Ohio there are certified mole trappers that can help you with your problem.  Trapping helps to reduce the population and keep your lawn looking its best.

Other remedies include poisons, human hairballs, lye, drano, pickle juice, broken glass, peppers, noise devices, ex lax, etc.  Although you may think you have cured your problem with some of these remedies, there is a good chance that the moles have just moved on.

Mole trapping is some what of an art and best left to a professional.  If you decide that you would like to purchase a trap and trap them yourself I suggest checking out:

This website is from a trapper in Cincinnati and HE REALLY KNOWS MOLES!!!

Guest Author: Andrew Muntz received his Master’s of Science in Turfgrass science and his Bachelors of Science in Landscape Horticulture at The Ohio State University, Columbus OH.