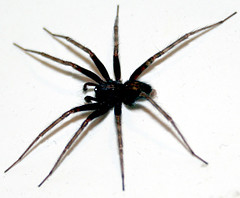 Along with warmer temperatures and the lazy days of summer come an unpleasant problem: insects. When insects eat your plants, irritate your pets, and ruin your backyard cookouts, you may wonder if there's something you can do to control them. Well, there is.

Our Surface Insect Control guarantees that your lawn will be free from nuisance pests and turf-damaging insects all summer long. We're here to protect your lawn and family from the following insects:

Billbugs
Billbugs are a type of weevil, and they can grow to about half an inch long. They are at their most dangerous when they are young grubs because they feed on the roots of your grass. Another problem caused by billbugs is that they are quite delicious to some bigger pests like skunks. If you have billbugs living in your lawn, skunks may come to feed on them. While it's nice to have something eating the billbugs, you probably don't want too many skunk visitors. Preemptive insect control can take care of both the billbugs and the skunks.

Chinch Bugs
The name "chinch bugs" comes from the Spanish word "chinche," which means pest or troublesome. Troublesome is a perfect word to describe chinch bugs. They're so small you can barely see them, but you'll definitely see their impact when they begin to eat your lawn. Chinch bugs feed on grass stems and grain crops. In the 20th century, the chinch bug was a major problem to midwestern farmers; it decimated corn and wheat crops. Many farmers switched to soybeans, which chinch bugs don't like to eat, so chinch bugs today prefer to eat residential lawns.

Fleas
These wingless parasites have mouth parts that have adapted for piercing the skin and sucking blood. They're great jumpers, able to jump 7 inches high and 13 inches long, so they can jump off the surface of the lawn to a person or animal. Flea bites cause an itching sensation, and some people and animals develop allergic reactions to flea bites, which often show up in clusters. Fleas are vectors of disease; they can transmit bacterial, viral, and rickettsial diseases.

Ticks
Ticks are parasites, meaning they find a host to attach to and then feed on blood from that host. Obviously, you don't want to be that tick's host, and you don't want your children and pets to suffer from any of the diseases carried by them, such as Lyme disease and Q fever. Interestingly, tick bites may induce an allergy to red meat. Removing ticks from hosts can be a gruesome affair; it's best to keep ticks away from your property and not deal with them at all.

Spiders
Spiders come in a wide variety of shapes and sizes. As of 2012, 43,000 different species of spiders had been discovered, but some scientists, such as Norman Platnick of the American Museum of Natural History, think that only 20% of all the spiders on earth have been discovered and classified. Spider bites are usually a minor annoyance, but recluse and black widow spiders can cause serious problems for humans and pets.

Beetles and Ants
When beetles are out-and-about during the summer, they love to feed on rose bushes, tree leaves, and shrubs, and when they're burrowed in the ground as grubs, they feed on the roots of your lawn. Ants build colonies and bite people and animals. If you've ever stepped into an ant colony, you know how unpleasant they are to have around.

To set up your own insect control, call us at Weed-Pro today. We can free your summer of unpleasant insects and pests.

As the owner and president of Weed Pro, Rob Palmer is committed to helping Ohio properties look and feel their best. With years of experience in the field and a passion for helping property owners, he offers useful lawn care insight and advice on the Weed Pro blog.