Giant Hogweed Spreading Across Ohio - How to Identify It

Giant Hogweed originated in Asia, where it was used exclusively in ornamental gardens. It was then transported to Great Britain and eventually, shipped to gardens in America and Canada. Because just one plant can produce 20,000 seeds, which can spread many miles away from the mother plant, they are making their way into backyards, parks, and other outdoor spaces. This species, which is on Ohio's noxious plant list, has spread throughout the Eastern and Southeastern parts of the States, and the ecological and health ramifications are alarming.

There are more than 10 confirmed Hogweed sites in Ashtabula County and a site confirmed in both Lake and Columbiana counties. There have been reports of the weed through many counties from the northeast corner of Ohio down through Franklin County, but those reports are yet to be confirmed. And with more than 600 confirmed sites in Western PA, we can expect to see more and more of this weed throughout Ohio. 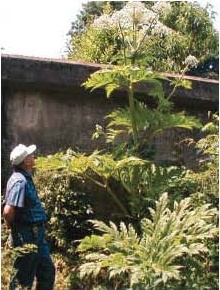 Giant Hogweed is a weed and it has the potential to grow more than 15 feet tall, with leaves that can reach widths of 5 feet and umbrella shaped white flowers up to 2.5 feet in diameter. Since they are perennials, they come up every year. Their flowers resemble the plant, Queen Anne's Lace, and some people also confuse it with Cow Parsnip. Therefore, many people do not recognize Giant Hogweed when they see it.

Giant Hogweed’s greatest danger is the effect its sap has on humans. Its sap is a phototoxin, which means if the sap touches your skin, and then your skin is exposed to sunlight, a serious skin reaction known as photodermatitis may occur, which results in swelling and blistering, and may lead to permanent scarring. Contact of the sap with the eyes can cause temporary and sometimes permanent blindness. It is only the sap that is dangerous to humans, simply brushing against the plant will not cause a reaction.

For these reasons, Giant Hogweed has become a major concern for parents and health officials. Since it is so large and impressive, it becomes an attractive nuisance for children, who may try to break it's stem to use it as a walking stick, toy sword or to try to pluck its huge flowers. Not only are people vulnerable to the Giant Hogweed, but many animals, such as dogs can brush against its sap and spread it to humans.

Giant Hogweed also affects the ecosystem. It is a huge plant that requires a lot of resources and the plants growing near it have to compete for space, sunlight, and water. Little by little, Giant Hogweed wins the competition for natural resources and causes the surrounding plants to slowly die out. Giant Hogweed is also responsible for soil erosion because when the plant dies, or goes dormant for the winter, the soil is no longer packed down firmly around its roots.

Extreme caution should be taken if this plant is identified in your yard. Protective clothing and eye wear should be worn when working around this plant, especially when cutting, as the risk of splashing the toxic sap onto the skin will be the greatest. This is a particularly hardy weed, that can be resistant to big box store herbicides. If you suspect you have Giant Hogweed plants in your yard or on your property, you should contact the Ohio Department of Agriculture at 1-800-282-1955. You may view an educational flier on Giant Hogweed, put out by the United States Department of Agriculture here, but please be warned that the link includes some graphic photos of severe skin reactions from contact with Hogweed sap.

You may not have Giant Hogweed in your yard, but the list of weeds that invade Ohio turf grass lawns can seem endless. If weeds seem to be winning the battle for your lawn this Summer, click below, and let WeedPro put together a custom package to give you the healthiest lawn possible.